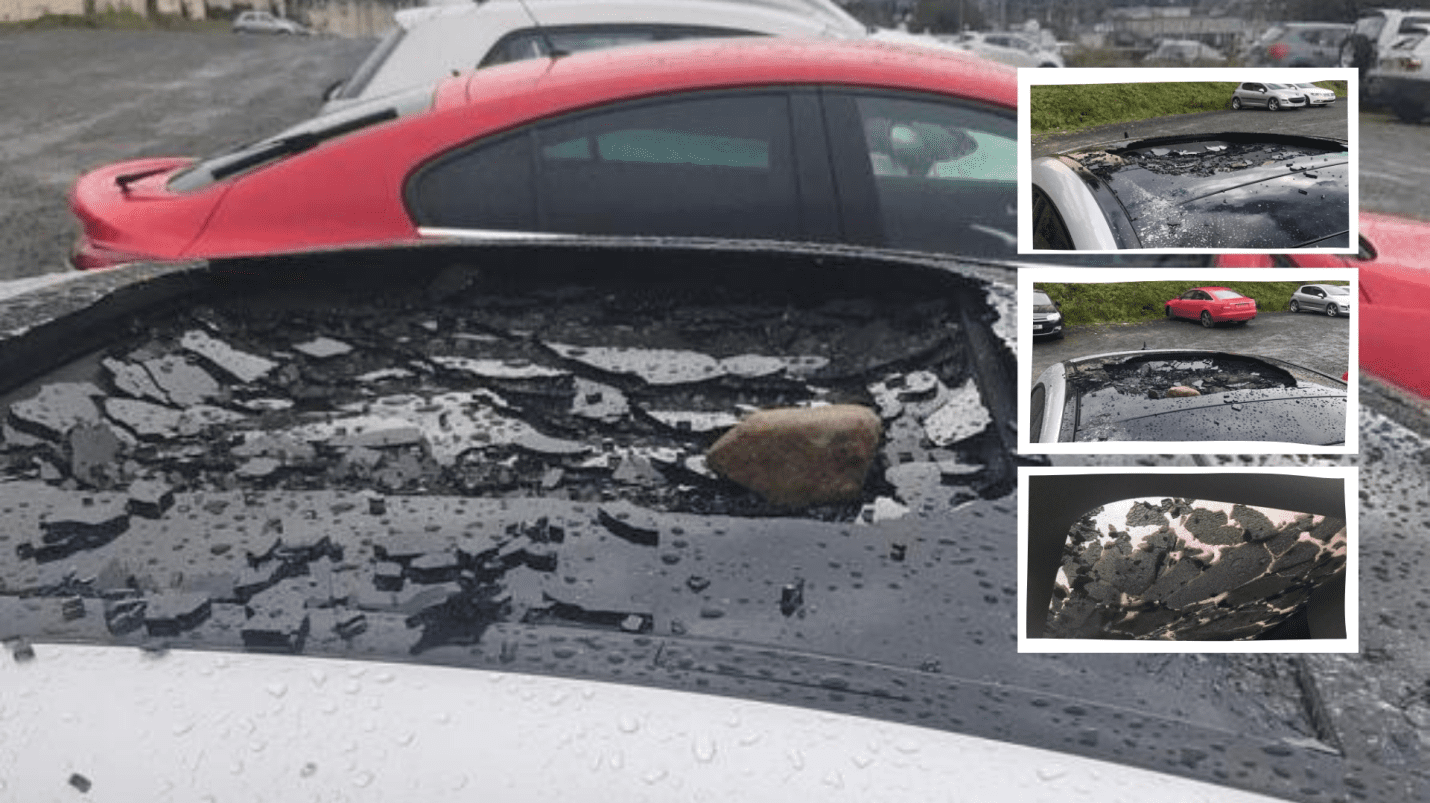 A local woman has said she is shocked and upset after vandals attacked her car in a Newry car park – the third such attack in just one week.

Marketing Executive Jessica Phillips, a member of staff at Co-Working and Serviced office business Granite Exchange on Kildare Street, parked her Mercedes car in North Street Car Park, the site of the former North Street Flats, in the city centre.

She returned at the end of her working day to find extensive damage to the vehicle.

“Most people working nearby park in North Street car park as it’s free and close to the city centre,” Jessica explained.

“However, due to the number of people working from home in the last few months, there have been much fewer cars.”

Jessica continued, “I finished work earlier than usual, at around 4:20 pm, and when I got to the car park that’s when I noticed a number of large rocks around the vehicle and on its roof.

“There were around nine house-brick size stones that had been used to cause the damage. The panoramic roof is completely destroyed.”

Ms Phillips said other rocks that missed the sunroof had also damaged a rear brake light and left scuff marks at the back of her car.

It seems that luckily for other motorists, none of the cars parked close by were damaged in the incident.

However, that does seem to indicate that the car was specifically targeted, quite possibly because the roof glass would break and shatter the way that it did.

After discovering the damage, Jessica contacted local police, who she said were “very prompt and sympathetic” in their response.

Police said they received a report on Tuesday 18 August and stated, “Sometime between 7:45 am and 4 pm damage was caused to the windscreen of the vehicle as well as the roof and rear light.”

Security at the car park removed

A spokesman for Newry BID stated, “We are aware of the recent acts of vandalism, and the police are investigating.

“We do have security for the site at opening and closing.”

The spokesman said Newry BID had to get an attendant on the site last year due to “sustained irresponsible parking”.

And the spokesperson said that, given the current COVID-19 pandemic, the car park was not being used “and the BID didn’t levy its members in light of lockdown, meaning that we had to remove the attendant both from a need and cost perspective.”

“We are a not for profit member-funded organisation investing in Newry and already make a significant financial commitment to provide free car parking.

The spokesman added, “The Police will be increasing their patrols in the area.

“We will review the security position but have a very limited budget, and if the vandalism continues, we may, unfortunately, have to review our ability to continue providing this free service.”

The third incident in recent weeks

After investigating and speaking with residents, police said Ms Phillip’s car was the third incident of vandalism in the area in the last seven days.

After putting up a story on Instagram to warn others who use the car park, Jessica said she had received similar stories from other local drivers; including reports of tyre slashing incidents and cars “stoned by youths”.

Thankfully for Jessica, CRASH Services arranged for her vehicle to be towed to a safe place and will provide assistance during the subsequent investigation into the incident.

Although upset at the incident and shocked by the spate of recent attacks, Jessica said she is remaining positive.

“I am fortunate to have had great support, so I’ll be fine, and it is just a car, not a person that has been damaged.

“I feel sorry for anyone else having to deal with the carnage of an unprovoked situation like this,” she added.

Newry drivers urged to be vigilant

“Sadly, this isn’t the first time that local drivers have returned to their cars to find them damaged in a car park.

We would urge all drivers to be wary of where they park and remove all valuables from inside their cars.

Whilst CRASH normally help drivers who have been involved in accidents caused by other motorists, we will help anyone to get back on the road as quickly as possible and deal with insurance companies on their behalf.” Lisa added.

Anyone with any information about the incident should call 101 and quote reference number 1363 of the 18/08/20.

You can also submit a report online using the PSNI’s non-emergency reporting form via http://www.psni.police.uk/makeareport/.

You can also contact Crimestoppers anonymously on 0800 555 111 or online at http://crimestoppers-uk.org/.